Where we are & how to reach us

Close to the center of Forte dei Marmi, but silence and tranquility reign in our rooms

Where We Are
The Miramonti is a 3-star hotel in Forte dei Marmi located in the prestigious and peacefularea of Imperial Rome.
In a strategic position and surrounded by greenery, it isonly 700 meters from the sea and less than 1km from the centre.
Bicycles are provided by the hotel. The centre and the sea are both easily accessible in a few minutes (thanks to the numerous cycle paths), allowing you to leave yourcar safely inside our covered and guarded internalparking lot.
For those who love cycling it is possible to reach the Versiliana Park in just 10 minutes, a true natural oasis.
In less than 10 minutes those in search of nightlife can reach the renowned "Capannina di Franceschi" or the various places along the Versilia seafront by bike.
The hotel is just 2km (5 minutes by car) from the motorway exit (Versilia) in Forte dei Marmi.
How to Reach Us
Car
Via the A12 Genova / Livorno motorway, take the "Versilia" exit. Go towards Forte dei Marmi.
Continue straight on until the roundabout, take the 3rd exit into Via XX Settembre.
Follow the road to the traffic lights, turn left into Via Della Barbiera and follow the road for about 200 metres.
At this point, turn right into Via L. Raffaelli and follow the road for about 100 metres, after which you will findthe entrance to the Hotel Miramonti on the left.

Plane
From the Galilei Airport of Pisa, you can reach the Hotel Miramonti in 30 minutes by car.

Train
Getting to the hotel by train is very simple.
It is only 10 minutes from Forte dei Marmi - Querceta railway station.
It is possible to arrive by taxi or request our shuttle. 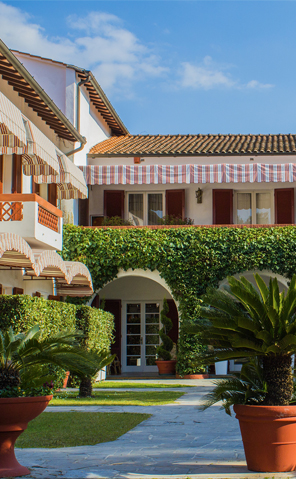